I Just Got Diagnosed 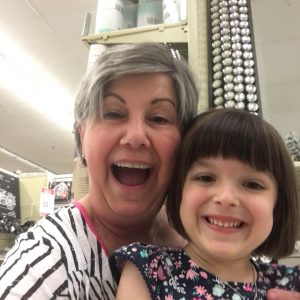 A personal letter from Board Member Betty Kirkindoll

For anyone reading this, I’m so honored to share my story with you.

My father had Alzheimer’s disease as did his brother and both sisters.  I knew my risk of inheriting it was significant.  What I did not know until recently was that my risk of having early onset Alzheimer’s increased because my father and one or more of his siblings had it.

As with most aging people, I began to worry when I would enter a room and forget what I went in there for or when I would forget where I placed something; however, things started to change.  I began to lose moments of time and started becoming confused and unable to focus at work.  I decided to talk to my neurologist to determine what was happening.

I had the scans which “suggested” Alzheimer’s and then decided to take the final step – a lumbar puncture (spinal tap).  On August 8, 2018,  my doctor told me that my spinal fluid did have traces of the amyloid plaque and the toxins associated with Alzheimer’s.

For the next two weeks, I would open my eyes each morning and immediately start crying.  I stumbled through each day feeling helpless and terrified.  I prayed to God to please spare my family from the devastation they might endure.

And then I decided to fight.

I hoped to be able to get into a clinical trial and made an appointment with a doctor in Dallas.  I was not eligible for the clinical trial because of a heart condition; however, was told the “cure” is on the horizon.  The final clinical trials are being done at this time and the drug will then go to the FDA for approval.  Most importantly – I have hope!

I know this is a confusing and scary diagnosis, and I have been right where you are. Just know, there are local resources and organizations like the East Texas Alzheimer’s Alliance who are there to help you every step of the way.

I’m so thankful to possibly be the first generation of Alzheimer’s survivors!

All of us at East Texas Alzheimer’s Alliance are here for you and your family.

We realize you are still processing this diagnosis of Alzheimer’s disease or a related dementia. Our best advice is for you to learn a little bit at a time and apply it to your own situation.

Please explore our Local Resources page and read through some commonly asked questions below.

What is the difference between Alzheimer’s disease and dementia?

People tend to use the words ‘dementia’ and ‘Alzheimer’s’ interchangeably, as though they are the same thing – in fact, this is not the case.

Dementia is the umbrella term given to a number of symptoms that affect the brain. Someone with dementia is likely to experience a steady decline in their thinking ability, along with impaired memory and trouble communicating.

A diagnosis of dementia is similar to a that of a sore throat – it explains symptoms but doesn’t classify the illness. So dementia symptoms are a feature of Huntington’s disease, Parkinson’s disease and Alzheimer’s disease, although these conditions do not all follow the same progressions. For example, someone with Huntington’s or Parkinson’s may suffer from involuntary movements and twitches during the early stages.

Although there is no cure for dementia, some with the condition can expect to see improvements once the cause has been ascertained. When dementia symptoms are the result of metabolic disorders, tumors, drugs or hypoglycemia, for example, the patient can expect to see a dramatic improvement once the underlying cause is treated.

Alzheimer’s is one of the most common forms of dementia, accounting for up to 70 percent of diagnosed cases. It is only possible to give an absolute diagnosis of Alzheimer’s during a post-mortem examination, but doctors can diagnose the disease with reasonable accuracy.

Protein deposits in the brain form tangles and plaques which disrupt communication between cells. As the cells die, brain function is lost, and over time the brain can shrink quite dramatically. Damage can occur many years before the first symptoms appear, and once the disease is set in motion, it is impossible to treat, although some of the symptoms can usually be allayed, at least for a time.

Symptoms of Alzheimer’s include depression, apathy, confusion, difficulty remembering recent conversations and events, a sense of disorientation and changes in behavior. As the condition progresses, the individual can experience problems with walking, speaking and even swallowing, and will almost certainly require intensive one-to-one care.

The progression of Alzheimer’s tends to be quite slow, causing a gradual decline in the person’s mental processes over a period of around eight to 10 years. Most people are diagnosed over the age of 60, but there is an early-onset form of the disease which is believed to be caused by a faulty gene.

Can I get a blood test to confirm I have Alzheimer’s or a related dementia?

No. Alzheimer’s and related dementia’s have a clinical diagnosis from a neurologist.  There is not a blood test that can diagnose these diseases.

What should I expect?

Alzheimer’s and related dementias are progressive diseases with no known cure. While every individual is different, the Global Deterioration Scale is helpful for lay people.

Are there medications to help?

Yes. There are many medications on the market and several medications in promising clinical trials now in the development pipeline.